Kitties!  Blogger said they are forcing us kitties and woofies into "new" blogger.  Tomorrow I think.  Mom said she doesn't know how much of a learning curve it is- and she read someone's comment about difficulty posting pictures..so..if it gets too much to bother with, we will just take a long nap and pause blogging here and Admiral and her blogs too.  I meow too much anyway, she said!  As if!

Here I am last night. 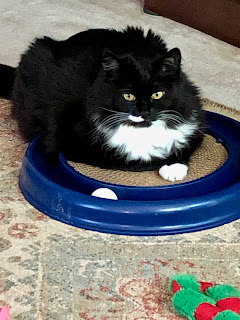 Mom took it from across the room and zoomed the phone view in on me.  I already told her it makes me out of focus...and she said pfffftt! See if I try to help HER again!

By the way, from Sep. 2019 till now, I have lost  a half a pound.  I had gotten up to 15.3 pounds so mom simply continued as always with my good wet fuds, and reduced my dry kibble.  She covered the bottom of my bowl with them daily, plus a few more...and let that  be my kibble for 24 hours.  Each morning she did the same.  I ate all my wet fuds in two meals, breakfast and supper, and had kibble to munch on between meals and at night.  I have my treats too of course but down to 4 a day.

Kitties!  Look what *I* have! The jumboist of jumbos!  I can walk in...have lots of room to turn around, I could about invite guests!  My other one was jumbo too.  But this one is even more! 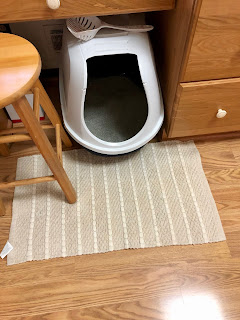 Thank you Mom!  You got your bathroom renovated...now my turn has come.   I had to show it off!
Posted by Katie Isabella at 6:09 AM 29 comments:

Kitties, it's Memorial Day.  This day has always been special to my mom.  She remembers living in Europe and being able to go onto Military bases that had a NATO presence, and wherever she was seeing the parades and hearing the music by the Military bands stationed at the various bases on Memorial Day.  Always a show of shows to her..as she missed home a lot.  Seeing our flag waving on the bases was so meaningful as she was so far away from America.

She said she is one who loves her Country. 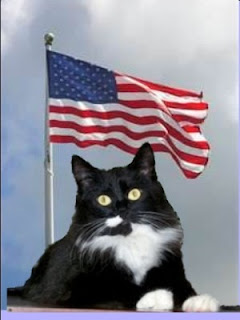 Lots to do!  Pawties to attend.  Naps to take.  Sunpuddles to use up.  Birds to watch.  A mouse in the house to patrol and catch if I can. (and you know I can).  Nomming to do.  Treats to ask for.

THoE to do, (even if I am just a single E) and honing up what's left of my claws!   Brushies to get and combings to demand.  Tunnels to go visit my furriends with. 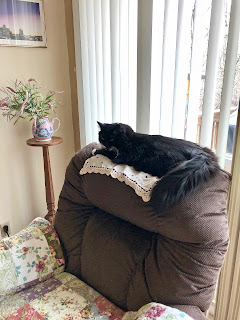 Kitties, I only got my extremely long claws cut yesterday.  But mom is thankful that when I put my paw on her face in the night, she doesn't have to worry about scratches.

I was just getting used to the far better Clinic who treated me like the Queen I am, until the virus came and they don't allow the pet parents inside any longer.  I need my mom with me to help me be calmer.  I even overcame the gabapentin in my anxiety Mar. 31 when I was there for my senior workup.  Never got it.  Just shots and claws done under duress.

Mom here:  I cannot understand how the shot of gabapentin the Vet gave her when she got there March 31 could have been "over-ridden" by Katie's anxiety.  But the Vet who spoke to me on the phone when I was called to come back for her after 3 hrs. said she was beside herself.   When I gave her the one and only 5 mg. capsule I was allowed to by her- before she wouldn't take it again......she was docile and just fine.  How can it be otherwise with a shot from the Vet?

So I am waiting to make another appointment for her exam so she can have her dental she needs; until they allow the pet parents back in...doesn't look any time soon, and to have her exam and workup with me alongside during the sedation process.

She had been progressing great with the new fear free Clinic I chose.  Now, all bets are off since she is back to as she was in the old place.

Just talking and meowing here.  Thanks for listening. 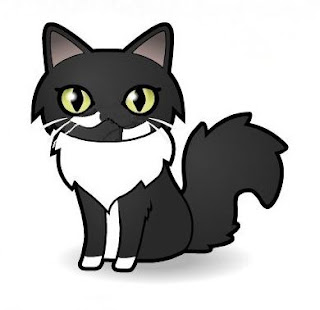 Kitties, have your mom or dad ever read you 'The Velveteen Rabbit"?   It is written by Margery Williams Bianco. 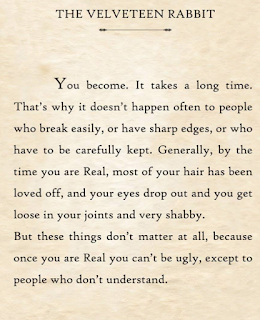 A good CB friend sent this yesterday and wondered if I perhaps have made my Donkey real.  Now Mom and I wonder too. 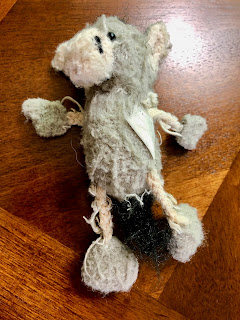 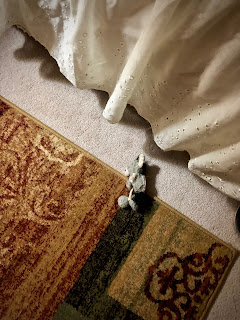 I have loved him for years...he looks the way well loved toys do.   He comes to bed or almost....every night.  He drops out of my mouf when I announce him... just at the final leap onto the bed.

Mom and I do love that story; and she read it again after our friend asked about me and Donkey.

I just wondered if you Kitties and Woofies had read it too?

Kitties!  I am about to have a nap, but before I have that. I thought I would show you two business cats hard at work, serving the people and bringing home the bacons!  MY job is far easier than theirs. I may apply for a position...on the counter. 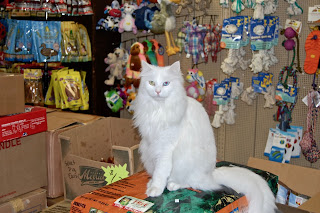 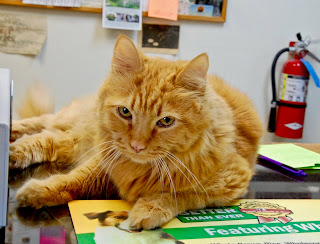 And my other favorite brovver who is here entertaining me,  sent mommy this today: 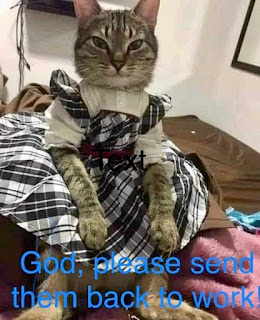 My gift to mom was what she calls the sweetest, warmest, softest most perfect little Katie chin and neck in the world, when I laid it very softly down on mom's face last night.  It woke her I know though she didn't speak or move to pet me.  But while I know it disturbs her sleep I had to especially tell her a Happy Mother's Day.  I wanted to show my love.  My brothers will do the same today.  I wanted it to be unanimous with all four of us.

I made sure to shift my warm satin side onto her head, her shoulder and the side of her face too.  After a short while she did ask me to move over a bit.  But she got the full effect of my love.

Happy Mother's Day to all mom's of furred kids.  And of human ones as well.  The kids of both sets are loved to the moon and back many times! 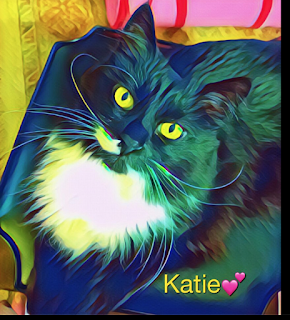 Artwork by Kimberly Koz
Posted by Katie Isabella at 11:04 AM 21 comments:

Kitties! I am on the lookout night and day for that spraying mancat caller who can't take no for an answer.

Here--- and every window I can get at. 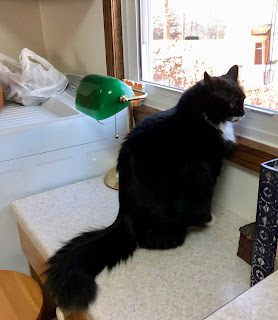 Sunpuddles and Patrolling and a long blog.

I have rotated between my fave sunpuddles since I got up today.  AND I am keeping an eye on the house against introoders.

Mom said I showed some thinking and some love the other day.  You see if you agree.  I was really REALLY upset about that male brown tabby who keeps calling on me, despite my saying my heart belongs to another.  He leaves a spray on  the wall of MY HOME  outside as a declaration of his intentions.   I was spitting, hissing, howling, trying to climb the door and get at him a few days ago...low guttural growls, there was no doubt.  Mom wanted to close the front door --where I was showing him what a real ladycat is!

I showed displaced aggression as mom reached waaaaay over the space between us to close the door. I hissed loudly at Mom, showed all my teefs and howled.  She spoke very low and said she was closing the door.  I wheeled and come to her..I showed her really how much I love her despite the aggression I had concerning the Tabby.  I came quickly to her...swiped at her pants legs while she stood there, never making contact with her, herself.  Just the pants legs to tell her to back off. It wasn't a mistake on my part.

Katie showed me once again that she will never allow the heat of the moment to harm me.  She has had opportunities to latch on and injure me but throughout her life with me, when it has come to a time she has to defend herself from an intruder, though I am there to close a door or whatever,  she never ever tries to hurt me or attack me.  Just loud warning.

I, mom, have said to anyone who will listen..Cats love their people as much as the people love their cat.  Cat parents know that, but those who have only other pets  of any kind will never know how to tell a cat loves their parent.  Mine proves it to me every single day and bedtime.  Cats do not behave nor think like other pets.  They are unique, as all animals are.  Judgement is passed on them because they don't bark, don't jump...show no pack animal ways, and in general, act like what they are.  A cat.     They don't make sound when they walk as they walk on furred feet that are very soft and soundless, yet they are called "sneaky".   They get low to the ground sometimes and they are again, called the human term, sneaky.  No. They are not,  They don't have thoughts of meanness and cruelty.   They aren't judgmental, they aren't aloof.  They love whoever loves them. 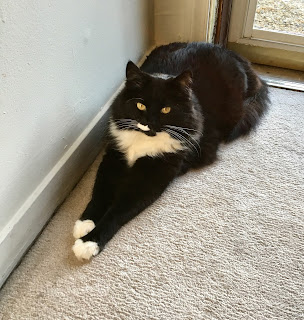 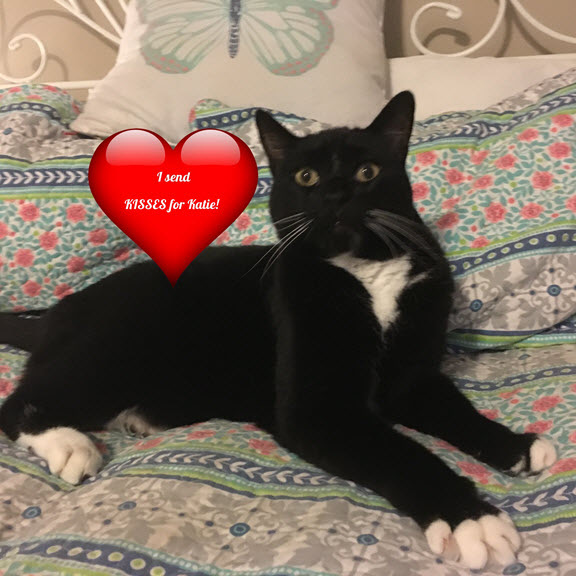 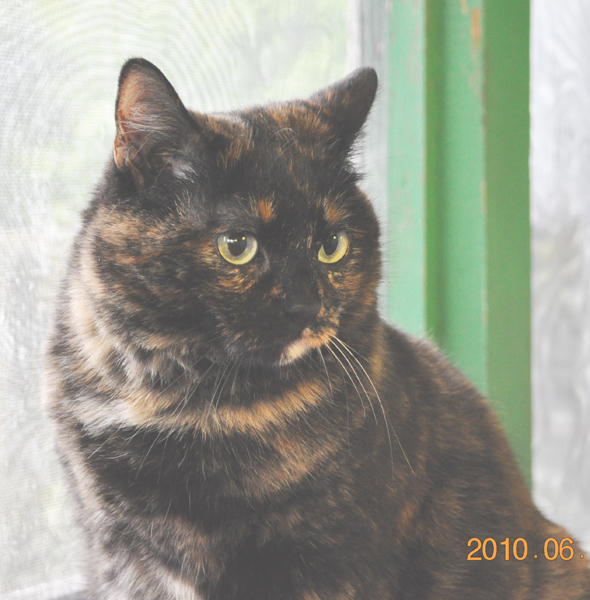